The Presentation Dinner was held at the Ocean Clipper Inn on Thursday night and was a great success due to lots of hard work from Gail and Eileen.

Most turned up in their best bib and tucker; there's always one or two who could lift fheir game in the dress code department. Something to look at for the next nats!!

I'll post more details of the medals and trophy winners when I get home next week but congratulations to everyone who received an award and a big Thank You to Chrissy and Anita from Trophy Express for donating the medals and engraving.

Thank you also to Alison Oldfield from AMF-Rockingham who attended and presented some awards, and Kath Larsen who seemed to have a bit to do with almost EVERYTHING.

Hope you all have a safe trip home. More next week when I get home from my train trip across the Nullabor Plains.

Last day of the competition. Lots of walking wounded today but everyone has had a great time; a bit sad it's all over so quickly. It remains to be seen how well we all scrub up for tonight's presentation dinner.

Here's a pic of most of us outside AMF Rockingham tenpin bowl. 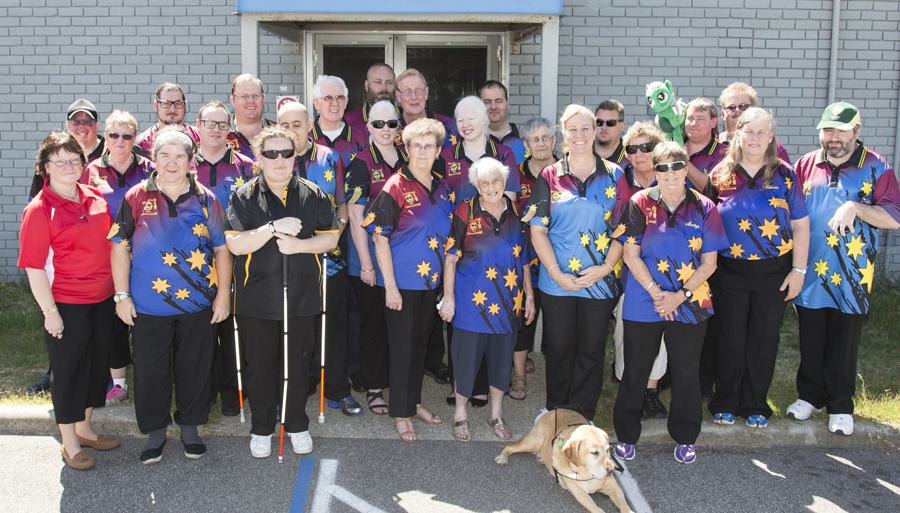 Doubles, so it must be Wednesday. Some great scores so far this week including Marilyn Luck 188, Tim Mitchell 196, Ryan Underwood 212, James Ford 219, Rhean Patching 214 and 221. Sorry if I've missed anyone!

We had a quick catch up with Matt Spencer who you will all remember from our last Nationals here in Perth. Matt and his partner now have a very energetic 3 year old to keep them occupied.

The Usual Suspects found their way back to the Ocean Clipper Inn after bowling, allegedly to check out room preparations for the presentation night, but ended up once again in the bar.

I suspect most are eating in tonight but some of the New South Wales bowlers are off to The Old Rockingham Hotel to talk about proper football.

A bit late with today's report. I've been taking advantage of the vouchers from the goodie bags to visit Lavoro restaurant. Very nice indeed.

The hard work began today. Most found it tough-going but there were still some good performances and it will be interesting to see how the final numbers stack up.

Kathy Larsen took on the job of 'hurding the cats' outside for a quick group photo after lunch. Hope the camera survived the process.

The 2018 AGM was held this afternoon. Matt Bryant and Rhian Patching were re-elected to the committee unopposed as ordinary members. Thanks to Cass Lovett who has served on the committee for the last year.

Following the AGM, an open forum of members was held to discuss our future planning. There was a great discussion about all things BVIT- related, including where we might go for our next national competition in 2020.

Doubles tomorrow. Hope we have a better day.

Well, two years in the planning and day one has finally arrived. Everyone managed to get to the bowl bright-eyed and bushy tailed. Gail Underwood is a past master at herding cats!

We had a surprise visit from a long time member and friend Sue Gilllingham who came down for the day for a catch up. Lovely to see you again Princess. When do I get my Knighthood?

The event was opened by Reece Whitby MLA, Member for Baldivas. He was very interested in BVIT and most impressed by everyone's attitude and approach to the game. Thanks Reece for making the time to attend.

AMF Rockingham did a great job preparing the lanes. Most found the first game a little challenging but settled down fairly quickly to some good scores.

Kath Larsen and her little (identical) gnomes did a great job preparing and distributing goody bags to all the participants with lots of information and freebies around Rockingham. Thanks for the coffee shop database; very useful.

Certain committee members were seen in the bar at the Clipper Inn. We thought they'd only gone there to check out the presentation dinner arrangements. Can't comment on the beer but the coffee was fantastic.

Most will have early nights tonight in preparation for day two, teams of four. More tomorrow.


Like Brown's cows, we've been ariving at the Quest at Rockingham since lunch time Saturday. Fantastic accommodation and wonderful staff. Great find Eileen.

The usual suspects were seen testing the local brew on Saturday night, AND they have Cooper's in WA!!

The question is, were the Saturday night activites the reason why one participant required specialist medical treatment, and on a Sunday even.

Quick trip to the bowl for a catch-up and to test the Cafe. Great food!!

Early night tonight in preparation for hostilities which begin tomorrow at 8:30 a.m. when the event will be opened by Reece Whitby MLA.


The 2018 BVIT national competition will be opened at AMF-Rockingham on Monday 19th March at 8:30 am
by Mr Reece Whitby MLA, Member for Baldivis and Parliamentary secretary

Oil Patterns:
The Tournament Director has just announced that the Kegal MIDDLE ROAD 4239 oil pattern will be used for the event.


The Ninth Australian Blind and Vision Impaired Tenpin Bowling Championships will be held at AMF-Rockingham, Rockingham WA from 19th to 22nd March 2018.

This TBA accredited championship is open to any bowler who:

For more information about the AGM location and times, agenda and committee vacancies, click here

Presentation Dinner:
The Presentation dinner will be held on Thursday night 22nd March at the Ocean Clipper Inn which is right along side the bowl.

The cost to attent the Presentation dinner is $50, payment to be included along with the bowling entry fees.